Under the terms of the agreement, Little Flake will be granted exclusive rights to extract gold from the Australia Creek property, with Metallic Minerals receiving a percentage of the production as a royalty. This partnership will combine Metallic Minerals' expertise in mineral exploration and Little Flake's experience in gold mining to maximize production and profitability for both groups in the region. Mr. Schnabel is recognized as a highly experienced miner and, in December 2022, was awarded the Robert E. Leckie Award for Excellence in Environmental Stewardship by the Yukon Government for reclamation work in the Klondike goldfields.

"We are excited to be working with Parker and the highly experienced Little Flake mining team and believe this partnership will be lucrative for both our companies, given Little Flakes track record of impressive alluvial gold production," said Greg Johnson, Metallic Minerals Chairman & CEO. "Our recent gold discoveries at Australia Creek represent a major extension of the Klondike to the east and is one of the biggest new discoveries in this historic district in decades. Metallic Minerals is one of the largest owners of alluvial gold mining claims in the Yukon Territory, including this large block of unmined claims in the Klondike. Starting with exceptional operators like Little Flake, we anticipate the potential for the generation of significant production royalties, which will provide funding toward our hard rock silver and copper exploration projects in Yukon and Colorado. An important criterion for our evaluation of potential additional alluvial operators will be demonstrated operational excellence and environmental stewardship that aligns with Metallic Minerals focus on ESG values."

Parker Schnabel, owner and operator of Little Flake Mining, commented, "Our award-winning team looks forward to working with Metallic Minerals and we plan to hit the ground running on Australia Creek. Planning is underway for a 400-hole drill program this winter on the property and we anticipate beginning mining operations this spring. This under-explored part of the Klondike shows vast potential for new discoveries, and we believe our collaboration with the veteran exploration team at Metallic will unlock this potential for both our groups."

The agreement is effective immediately with production targeted to begin by June. The companies will be working together closely to ensure a rapid and successful start-up for the partnership.

Under the terms of the Australia Creek property agreement, Little Flake must complete a $1 million minimum annual work commitment and pay Metallic Minerals an annual advance royalty plus a variable royalty on all gold production.

Metallic Minerals holds a 100% interest in 36.4 square kilometres of mining rights along the Australia Creek drainage south of Dawson City, Yukon. Australia Creek is part of the historic Klondike gold district that is estimated to have produced over 20 million ounces of gold since its discovery in 1898. Australia Creek and its benches are now recognized by Yukon Geological Survey as the eastern continuation of the highly productive Klondike Goldfields, which is the largest placer gold producing area in the Yukon. Modern, open-pit operations in the Klondike have doubled production in the region over the past decade1.

Despite extensive mining activity nearby, Australia Creek itself was not historically mined due to its importance as a source of water and hydro-electric power for the floating dredge operations that were conducted in the area between the 1920s and 1960s. However, exploration drilling at Australia Creek has returned gold-in-gravel values that compare to some of the best producing areas of the Klondike presenting an exciting opportunity for the Company. 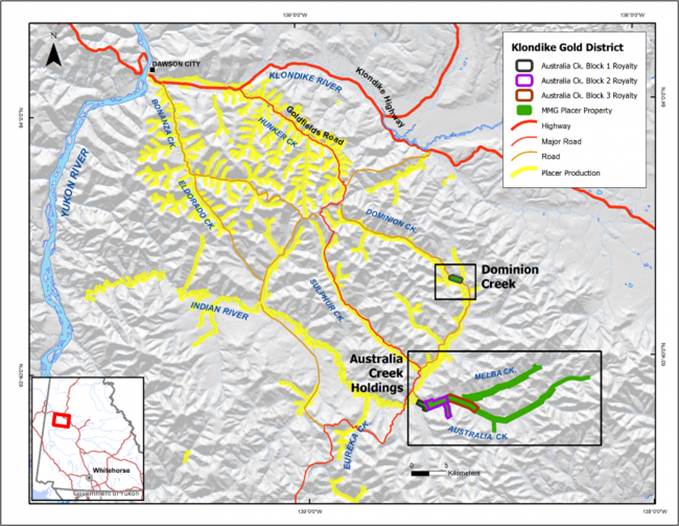 Metallic Minerals is very pleased to announce that we have been invited to participate in this year's AMEBC Mineral Roundup conference in Vancouver and will be displaying intervals of drill core from the Keno Silver project and our La Plata project on Wednesday, January 25th and Thursday, the 26th. Key members of our management and technical teams will be on hand to discuss the project and opportunity. Visit us at booth #1016 in the Core Shack. For more information and to register, visit here.

Metallic Minerals President, Scott Petsel, will be providing a corporate update and participating in a moderated roundtable discussion during the upcoming Vancouver Resource Investment Conference on Sunday, January 29th at 3:30 PM in the Yukon Pavilion. For more information, visit here.

Little Flake is a mining company founded and owned by Parker Schnabel of the hit Discovery Channel television series Gold Rush. Now in its thirteenth season, Gold Rush is Discovery Channel's number one rated and most watched television series. Little Flake specializes in placer gold mining and operates in the Klondike region of Canada and in Alaska. Mr. Schnabel comes from a multi-generational mining family and under Schnabel's entrepreneurial leadership, Little Flake has become one of the largest and most successful operators in the Yukon's placer gold mining industry.

Metallic Minerals Corp. is a leading exploration and development stage company, focused on silver and gold in the high-grade Keno Hill and Klondike districts of the Yukon, and copper, silver and critical minerals in the La Plata mining district in Colorado. Our objective is to create shareholder value through a systematic, entrepreneurial approach to making exploration discoveries, growing resources and advancing projects toward development. Metallic Minerals has consolidated the second-largest land position in the historic Keno Hill silver district of Canada's Yukon Territory, directly adjacent to Hecla Mining's operations, with more than 300 million ounces of high-grade silver in past production and current M&I resources. Hecla Mining Company, the largest primary silver producer in the USA and third largest in the world, completed the acquisition of Alexco in September 2022. In April 2022, Metallic Minerals announced the inaugural NI 43-101 mineral resource estimate for its La Plata silver-gold-copper project in southwestern Colorado. The Company is also one of the largest holders of alluvial gold claims in the Yukon and is building a production royalty business by partnering with experienced mining operators. All of the districts in which Metallic Minerals operates have seen significant mineral production and have existing infrastructure, including power and road access. Metallic Minerals is led by a team with a track record of discovery and exploration success on several major precious and base metal deposits in the region, as well as having large-scale development, permitting and project financing expertise. The Metallic Minerals team has been recognized for its environmental stewardship practices and is committed to responsible and sustainable resource development.

This news release includes certain statements that may be deemed "forward-looking statements". All statements in this release, other than statements of historical facts including, without limitation, statements regarding potential mineralization, historic production, estimation of mineral resources, the realization of mineral resource estimates, interpretation of prior exploration and potential exploration results, the timing and success of exploration activities generally, the timing and results of future resource estimates, permitting time lines, metal prices and currency exchange rates, availability of capital, government regulation of exploration operations, environmental risks, reclamation, title, statements about expected results of operations, cash flows, financial position and future dividends as well as financial position, prospects, and future plans and objectives of the Company are forward-looking statements that involve various risks and uncertainties. Although Metallic Minerals believes the expectations expressed in such forward-looking statements are based on reasonable assumptions, such statements are not guarantees of future performance and actual results or developments may differ materially from those in the forward-looking statements. Forward-looking statements are based on a number of material factors and assumptions. Factors that could cause actual results to differ materially from those in forward-looking statements include failure to obtain necessary approvals, unsuccessful exploration results, unsuccessrul operations, changes in project parameters as plans continue to be refined, results of future resource estimates, future metal prices, availability of capital and financing on acceptable terms, general economic, market or business conditions, risks associated with regulatory changes, defects in title, availability of personnel, materials and equipment on a timely basis, accidents or equipment breakdowns, uninsured risks, delays in receiving government approvals, unanticipated environmental impacts on operations and costs to remedy same and other exploration or other risks detailed herein and from time to time in the filings made by the Company with securities regulators. Readers are cautioned that mineral resources that are not mineral reserves do not have demonstrated economic viability. Mineral exploration, development of mines and mining operations is an inherently risky business. Accordingly, the actual events may differ materially from those projected in the forward-looking statements. For more information on Metallic Minerals and the risks and challenges of their businesses, investors should review their annual filings that are available at www.sedar.com.

Metallic Minerals to Present at the Emerging Growth Conference October...