VANCOUVER, BC / ACCESSWIRE / April 4, 2022 / Blue Lagoon Resources Inc. (the "Company") (CSE:BLLG)(FSE:7BL)(OTCQB:BLAGF) is pleased to provide shareholders its first update and recap of the first quarter of 2022. The Company's numerous accomplishments in the first quarter included the following.

FINANCING WITH STRATEGIC INVESTORS BOOSTS HEALTHY TREASURY WITH NO DEBT

"We are continuing with our aggressive strategy of advancing the Dome Mountain gold project at a rapid pace, having accomplished numerous important goals since acquiring this project only two years ago this past week," said Rana Vig, President and CEO of Blue Lagoon Resources. "Our entire team continues to wholeheartedly believe that we have an exceptional project at Dome Mountain. This belief was further bolstered last month by sophisticated investors like Crescat Capital and its strategic technical advisor, world renowned geologist, Dr. Quinton Hennigh, when they made a second investment in our company, which provided for more than 18% of the $5.7 million capital raise," he added.

The Company's President and CEO, Rana Vig, bought 100,000 shares (figure 1) in the open market during March 2022, thereby bolstering his personal share position to over 3.4 million.

In January 2022 the Company announced the results of its 2021 soil sampling program that resulted in identification of strong anomalous gold, zinc, and copper-in-soils zones in a number of new zones which warrant follow-up during the Company's 2022 exploration program.

In a news release dated January 20, 2022, Blue Lagoon Resources chief geologist, Bill Cronk said, "the soil sampling program was remarkably successful in that we identified multiple gold-in-soils anomalies as well as strong multi-element associations with the gold. The more anomalous elements (Zn, Cu, As, Mo, Pb etc.) that we see associated with gold, the higher degree of confidence we have of an underlying mineralized system thus, allowing us to immediately prioritize our follow-up program. A highly anomalous zinc zone to the northwest of Freegold is especially of interest as values here are very high and dwarf the zinc values seen in soils associated with the known Boulder Vein system where gold in the current resource has a very close correlation with elevated zinc values in core."

Due to an exceptionally slow turnaround time from assay labs, an industry wide problem, more than 28 assays remain pending.

On February 7, 2022 the Company news released the results from Hole DM-21-224 which encountered new, high-grade vein intercepts. This hole was drilled from the most southern pad in the newly discovered Chance Structural Corridor (see news release Dec 7, 2021) and drilled at an Azimuth of 167 Degrees. The target here was the continuation of mineralization seen in the corridor where the structural trend intersected the proposed eastern continuation of the Boulder Vein. The hole encountered a new, high-grade vein running 14.8 g/t Au and 38.3 g/t Ag over 7.3m. (see more details on this hole in the Company's news release Feb 7, 2022).

Upon receiving further results from the newly discovered Chance zone, in the Company's March 17, 2022 news release, Blue Lagoon President and CEO, Rana Vig commented, "during our 2021 Phase 2 drill program, the Chance Structural Zone was drilled with 29 holes from five different pads over a northwest to southeast strike length of 500 meters. From our most northwest pad, the Chance Structural Zone extends at least another one kilometer to the northwest. Every single pad drilled along this structural corridor in 2021 hit significant sulfide mineralization and we are very pleased to get such promising results back supporting our 2022 Chance Structural Zone exploration program, which is just one of several zones we are working on. This year will be very busy and exciting for us as we aggressively follow up on these results and more," he added.

"The significance of this new resource at Dome Mountain cannot be understated as our goal was to demonstrate that a limited amount of in-fill drilling would move ounces to a higher category, which was a complete success," said Bill Cronk, Chief Geologist for Blue Lagoon Resources. "While the new resource increases the contained gold ounces by 30% and silver ounces by 46%, more importantly, limited amount of new drilling since Blue Lagoon acquired the project in 2020 allowed us to increase the indicated resource by 102,582 gold ounces - amounting to an increase of 145%. In addition, 45,000 gold ounces have been upgraded to the Measured category, a first for this project," he added. (Feb 3, 2022).

The resource model is limited to the mineralization around the Boulder Vein, which is defined by 42,869 metres of drilling from 355 drill holes drilled from 1985 to 2016 and 26 infill holes from 8 drill pads totalling 3,786 metres drilled in 2020 and 13 infill holes totalling 3,005 metres drilled in 2021. Further information on the mineral resource estimate can be found in the Technical Report available at www.sedar.com and on the Company's website.

The following table provides a summary of the updated mineral resource:

SALE OF GOLD AND SILVER CONCENTRATE

During the first quarter, the Company's toll mill partner shipped the fourth shipment of concentrate made from the mineralized material from the Dome Mountain underground mine (news released February 14, 2022). The shipment of 103 dry tonnes of gold and silver concentrate grading approximately 90 g/t Au and 477 g/t Ag was sent to Ocean Partners UK Limited, a leading European based commodities trading company with offices in six countries around the world. All concentrate assays were completed at Base Met Labs, an accredited metallurgical testing facility located in Kamloops, BC. 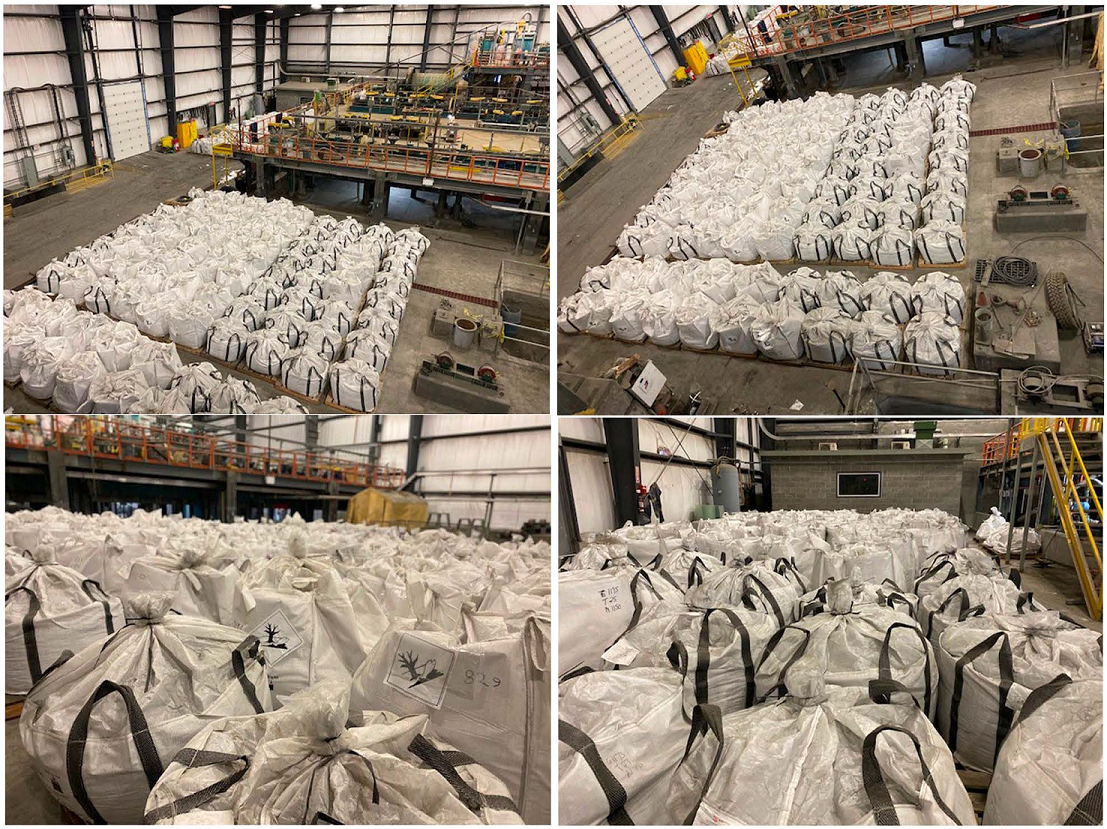 Bags full of gold and silver concentrate made from Dome Mountain mineralized material that were shipped from Nicola's milling facility in Merritt, B.C.

The Company has not made a decision to proceed to production at this time and will evaluate its production decision once all permit requirements are in place. Any production decision in advance of obtaining a feasibility study of mineral reserves demonstrating economic and technical viability of the project is associated with increased uncertainty and risk of failure.

The Company is continuing to advance its amendment work on its 75,000 tonnes per year mining permit and believes that it's now in the final stages of the approval process. The Company has submitted its draft application, which is being reviewed by the Ministry of Mines, and upon receipt of comments, will submit its final application seeking approval to commence mining operations at the Dome Mountain mine. Weekly meetings are being held with ministry staff that are greatly assisting in the approval process.

The Company also announces that it has retained Gold Standard Media (GSM) to conduct marketing services for the company and raise its public awareness. GSM is headed by Kenneth Ameduri, who manages a marketing team headquartered in Austin, Texas. The engagement is for a term of twelve months at a total cost of USD $250,000.

The scientific and technical data contained in this news release was approved by William Cronk, P.Geo., a qualified person as defined in NI 43-101 and a consultant to the Company.

The CSE has not reviewed and does not accept responsibility for the adequacy or accuracy of this release. The securities referenced in this news release have not and will not be registered under the U.S. Securities Act of 1933, as amended and may not be offered or sold in the United States absent registration or an applicable exemption from registration requirements. This news release does not constitute an offer to sell or the solicitation of any offer to buy nor will there be any sale of these securities in any province, state or jurisdiction in which such offer, solicitation or sale would be unlawful prior to registration or qualification under the securities laws of any such province, state or jurisdiction.

Blue Lagoon Kicks Off 2022 Phase Two Drill And Exploration Program On Its...